After my visit to the Czech Republic in 2019, helping to light the ceremonial fire at “Fara” at Michalovy Hory village, I wanted to make fire with rubbing sticks. I tried making fire in December 2020 but had no success. In September this year, Bob and I took a trip to see my brother Dale, other family, and friends. I asked Dale to teach me how to do it because he is a lifelong outdoorsman and primitive camper. He and Bob were my coaches.

I laid out the tools I had to work with: Seton’s instructions from Book of Woodcraft, a homemade bow, spindle, and a stone with a pocket that I thought would work as a bearing block; a commercial kit bought off the internet with instructions; and a very long piece of straight yucca stalk to make more spindles if needed. (The stone came out of a box belonging to Seton that held bone carvings, stones, and fossils. I thought it would bring me luck.) 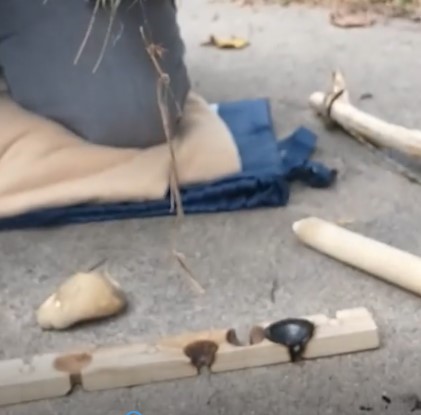 The coaches evaluated my tools. My homemade spindle would not work because it wasn’t straight enough. Dale showed me his and we sanded mine down. The commercial kit was too complicated to set up, so we didn’t use its bow or string. We also made a spindle from the yucca stalk (which was easier because it was already straight).

Using the commercial fireboard with my bow and newly made spindle with the stone I attempted the task. The spindle fell off the fire board and out of the bow almost immediately for many tries. Stringing the spindle was very difficult. It was often too tight, and I had to place it against my thigh and push hard to get the spindle in place. This left me bruised.  Other times it was too loose, and the spindle would fly away. Each time I tried, Dale would suggest something different — where to hold my wrist steady, where to put my foot on the fireboard, how to use the bow smoothly and steadily, and how to keep the spindle straight.

The stone wasn’t working well because the pocket wasn’t symmetrical, and the spindle would not seat into it. Dale made a wooden bearing block of wood that was about the same size of the stone which fit my hand. Another tool.

I tried different combinations of the tools, only getting a little smoke a couple of times. We had been working for nearly four hours. Finally, I just fell over, exhausted.

During this time Bob noticed that the commercial spindle had a bearing that allowed me to hold the bearing block with my hand vertically rather than over the top, like I did with the stone. At first, this was easier on my hands and arms, but no smoke or fire.

I asked Dale to demonstrate. He had smoke in just a few rotations with the tools I had used. If he could do it, so could I! Following him, I was unsuccessful. The coaches said I seemed to be doing everything right. They didn’t understand why I couldn’t make fire.

The next morning, I tried again for a couple of hours– in vain.

What was wrong? Maybe the wood? Maybe the rotations speed? Maybe the length of my bow stroke? Maybe I didn’t try long enough. I was generating heat, but that was all.

Bob thought through the sequence of events. Dale would demonstrate and I would follow, using the same fireboard hole. This might have caused a glaze on the spindle and the hole which would prevent any char forming. From then on, we roughened up the contact points before starting.

One of our stops was with a sculptor friend who works in wood and stone. We asked him if the fireboard was a soft or hard wood – he said soft. I showed him the stone and he noticed the pocket wasn’t smooth. He had the tools to ream it out. I tried again several times and again, was able to get smoke, but no fire. 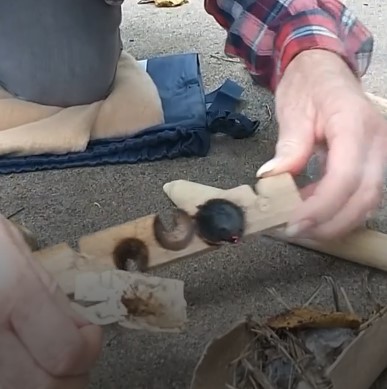 We went back to Dale’s house before heading home. It was the morning we left.  I set up next to the chimeria and seated a new fire hole, placed the birch bark under the fireboard, prepared the bird nest with tinder and some cotton wool, strung the spindle on the bow, and used the stone as the bearing block. I asked Bob to take the video. I got smoke very quickly and within a few minutes got embers. As the smoke increased, I concentrated on keeping the spindle straight, the bow moving in a steady rhythm, and didn’t stop! Very excitedly, I moved the embers to the bird nest, dropping some, but recovered them using a dried leaf in the nest. Then I leaned over it and started to gently blow them into a flame. It wasn’t working and I lost the smoke for a second. Bob told me to lift up the nest. Dale told me that I would likely singe my eyebrows and hair if I didn’t get out of the way. I fumbled with the nest, blowing gently letting more air in.

Success! I had flame. The whole session took about ten minutes. I felt accomplished and proud.

It helped that my coaches were encouraging me all along the way with, “that’s it.” “there you go”, “straighten the spindle” “keep your wrist steady”, “almost there”, etc. They called me “tenacious”.

Things I learned include:

You can see a video via the following link: https://www.youtube.com/watch?v=rlo5RSclpkE

After I got home, I tried again successfully! I will continue to practice.