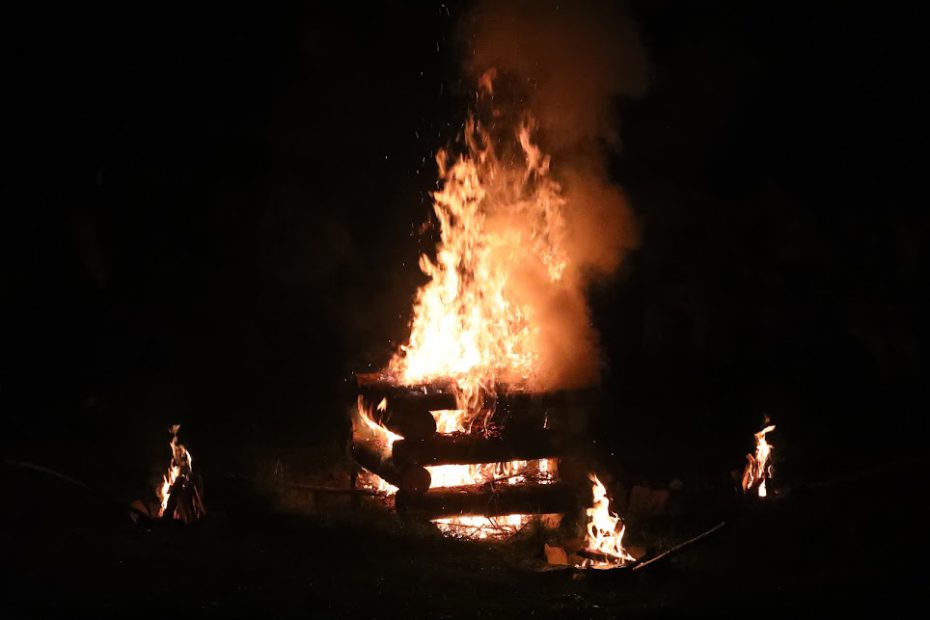 The Czech Woodcraft League held their 30-th Anniversary Ceremonial Council Fire last weekend. The WLCz was revived in 1990 after a long break. Between the years 1952-1990 all youth camping organizations were banned from their activities. The communist totalitarian regime in Czechoslovakia did not tolerate any organizations that were based on Woodcraft or Scouting. Woodcraft circles and individuals had been hidden in various organizations that survived the oppression – mostly as tourist clubs or associations promoting physical education. 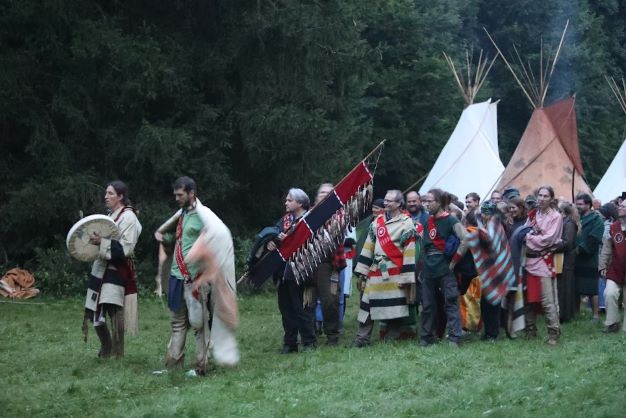 On Friday evening, August 27, 2021, some of us arrived at Samechov and gathered under the majestic spruce trees at the campsite and started building several teepees and making other preparations. 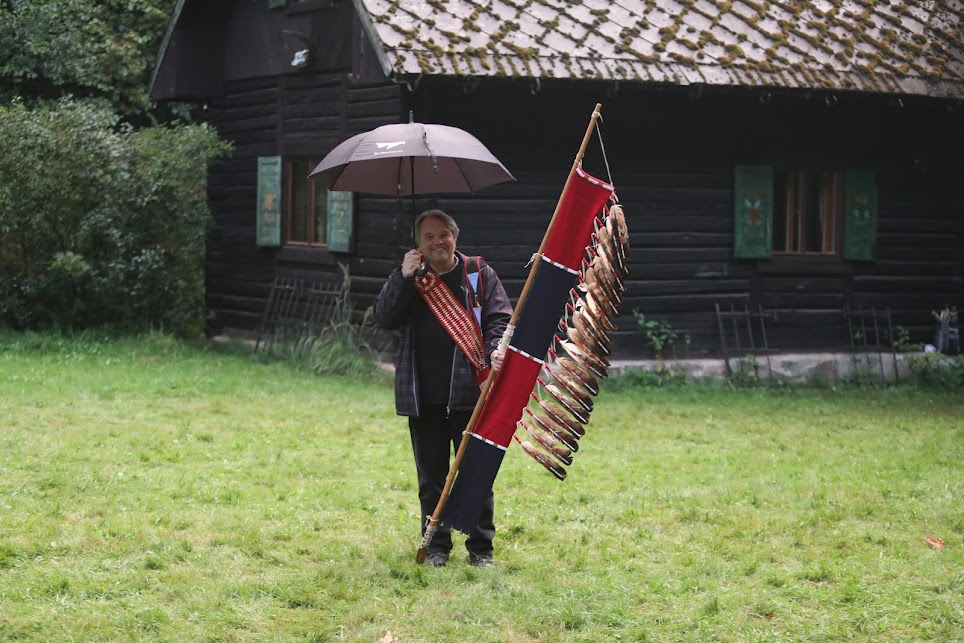 Smiles in the rain.

The mood was great even though the weather was completely unfavorable and the sky above us kept sending blessed moisture all the time with only short breaks.

On Saturday we started our day by singing the morning song – how else could we do that? The chieftains presented the program that was scheduled for the whole festive day .

As the day went, more and more Woodcrafters, young or old, arrived. People were coming from many  different places, not only from our country. The voices of all the ones who happily greeted  each other echoed cheerfully above the meadow.

Then came the first solemn moment. We met in a circle at the edge of the meadow where we were greeted by Chief Chlup and the fire-keeper Wičáka. A few witnesses talked about a long history of the Woodcraft camping on the meadows in Samechov. We followed by digging a pit for planting a lime tree. Later that afternoon all the people gathered again and planted the tree in a ceremonial way. Everybody watered the new tree with a splash of water and made a wish.

Whoever wanted could enter a traditional competition for the most beautiful handcraft – in the  native American or Woodcraft style according to the traditional Woodcraft concept of „the thinking hand“. A new category started this day – Living legends (for handcraft makers who are extremely skillful and difficult to compete with). The winners of the competition were announced in the evening at the ceremonial fire.

There is another long-standing tradition held at WLCz´s annual gatherings – a contest in lighting a fire using a flint, rubbing sticks with or without a bow. This year again, many braves came up and the contest could begin. It was exciting and everyone did their best. In the discipline of making the fire with the sticks without using a bow the cohesion between the Woodcrafters proved true and so a trio of Filip, Tokhatamani and Machimia was formed and they finally managed make the desired fire.

Since this gathering marked the 30th anniversary of the League´s revival, there was a need to honor the number 30. And how else but doing a sport? The 30 km relay race with embers in a beautiful metal torch made by Tokhatamani was held. 25 people took a 1200 m run across the meadow so that no one would be deprived of the sight of the graceful running of women and the muscles of our stout braves. The fire was ignited by Machimia, who had won the competition in making the fire with rubbing sticks and a bow. And again, that praiseworthy cohesion and support was shown. The men who were physically fit ran the 1200 m section on their own and the others joined in groups of 2-4 runners and divided the track according to their abilities.

During the day, when sipping tea or coffee, some people debated about the history of the League and also about the present or about the plans for the future. Throughout the day it was also possible to make a beautiful lantern under the guidance of Mokrous. 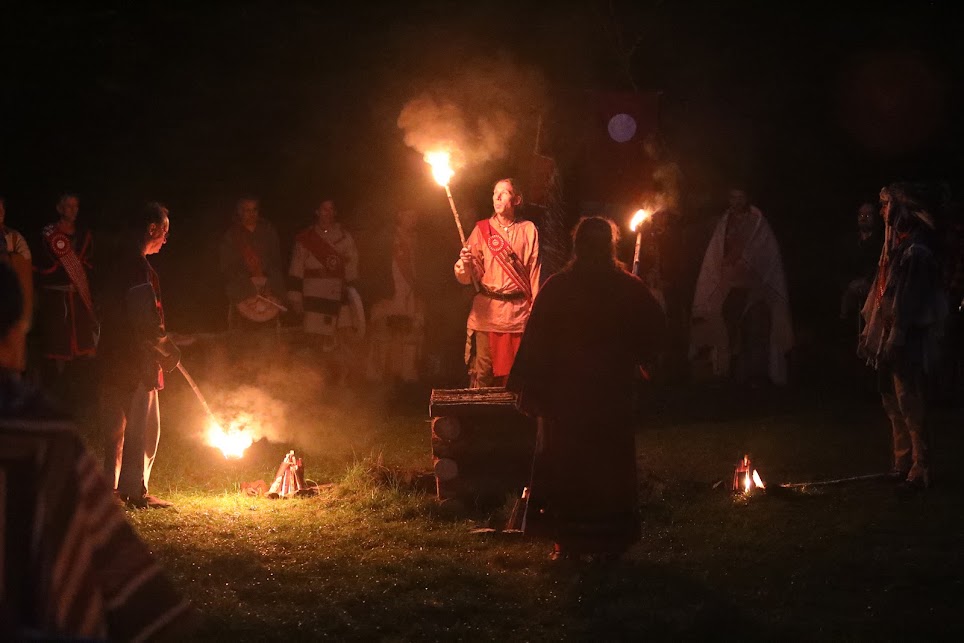 Starting the ceremonial fire by bringing light along the four Woodcraft ways.

The night was coming and it was time to start the ceremonial fire. The tribe or clan representatives and a few individual members of the WLCz brought light in their lanterns, the fire of the Great Spirit was ignited and the annual council fire began. 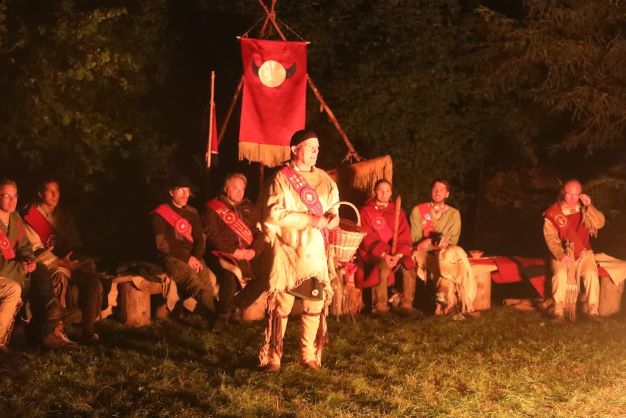 In the beginning, former WLCz chiefs and fire-keepers shared their memories. The winners of all competitions were announced and awarded with diplomas and prizes of various kinds.

Awarding of deeds and titles took place as the top ceremony of the whole evening. Lonely Beaver, our oldest member (aged 94), in the same time a keeper of the highest honorary Woodcraft title, led the ceremony. Many braves were awarded with Woodcraft titles, and it was a pleasure to see how many of our brothers and sisters have been climbing up the symbolical Woodcraft mountain. 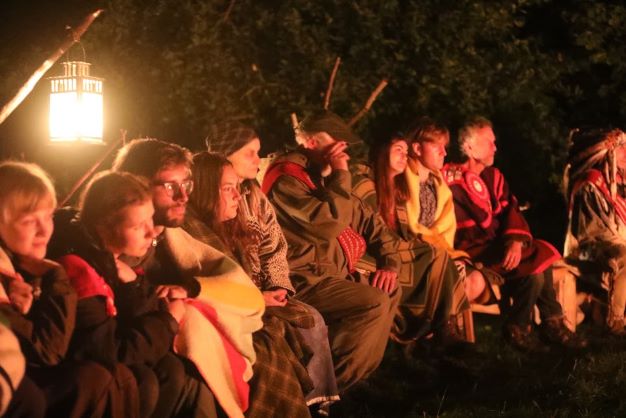 Czech Woodcrafters in one circle. 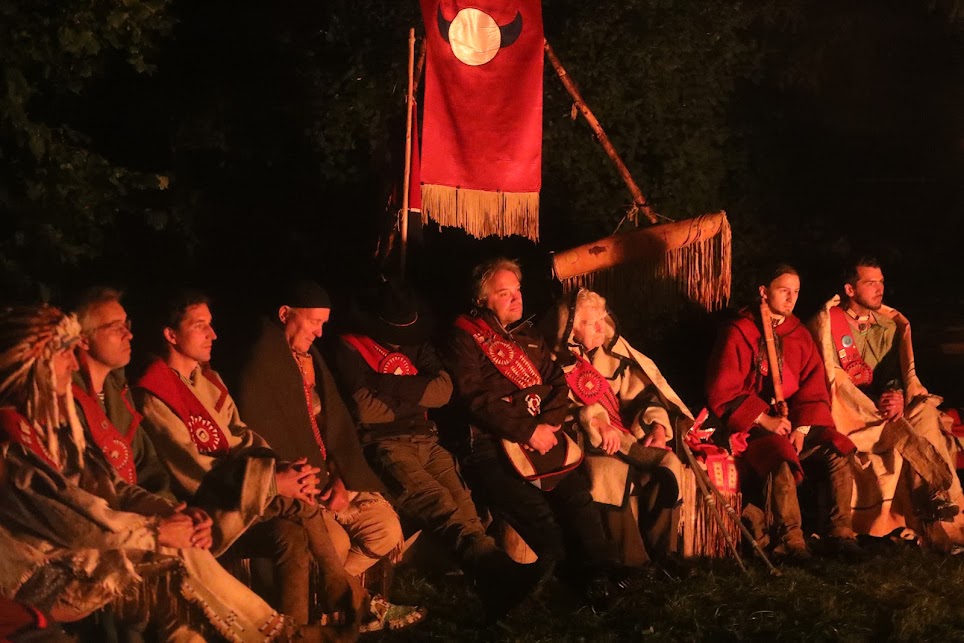 Young or old – we all follow the Woodcraft path. 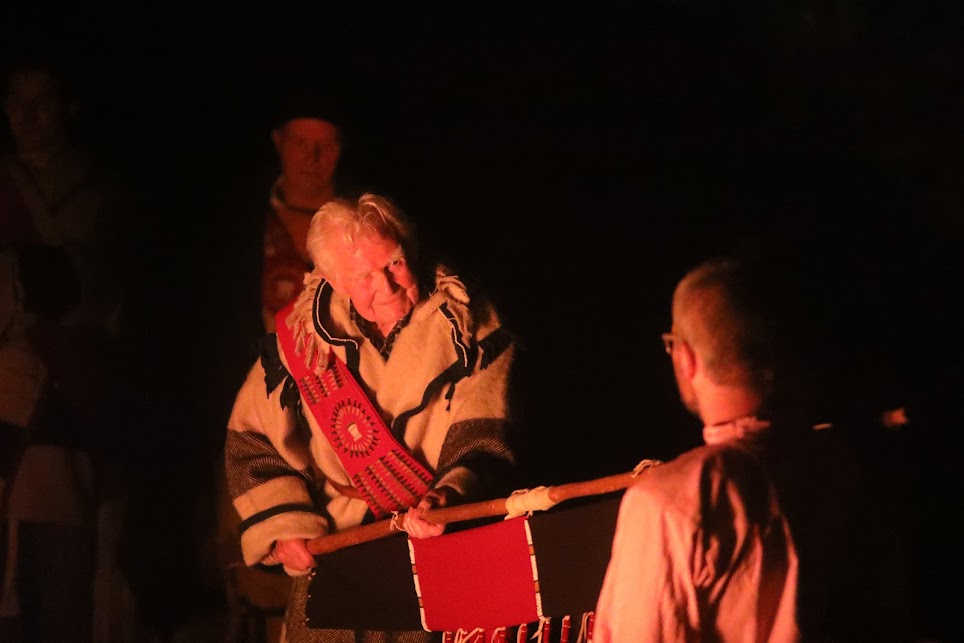 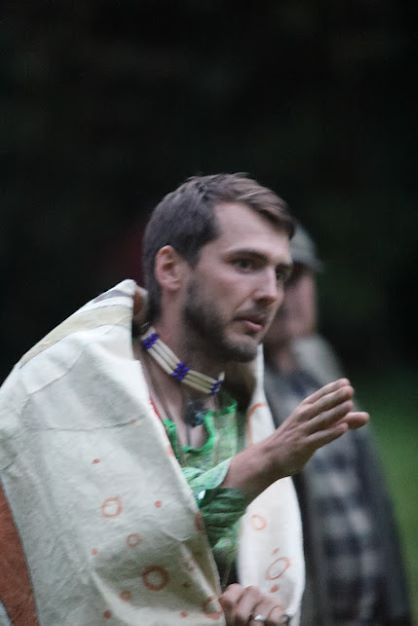 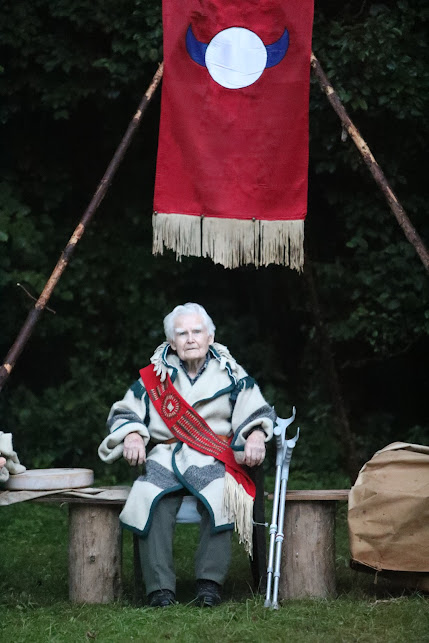 Sunday was a farewell day filled with tidying, cleaning, packing and saying goodbye. We had to return to our civilian homes, cities, work and schools. But the feeling, the mood, the energy and a lot of new experiences will keep our hearts warm. Hopefully at least until the next meeting.